To Book The Woodstock Era Experience Concert, GRAVESHIFT or The Chiclettes
Please call Julio Ray at 718-815-6233 or e-mail comedypie@gmail.com 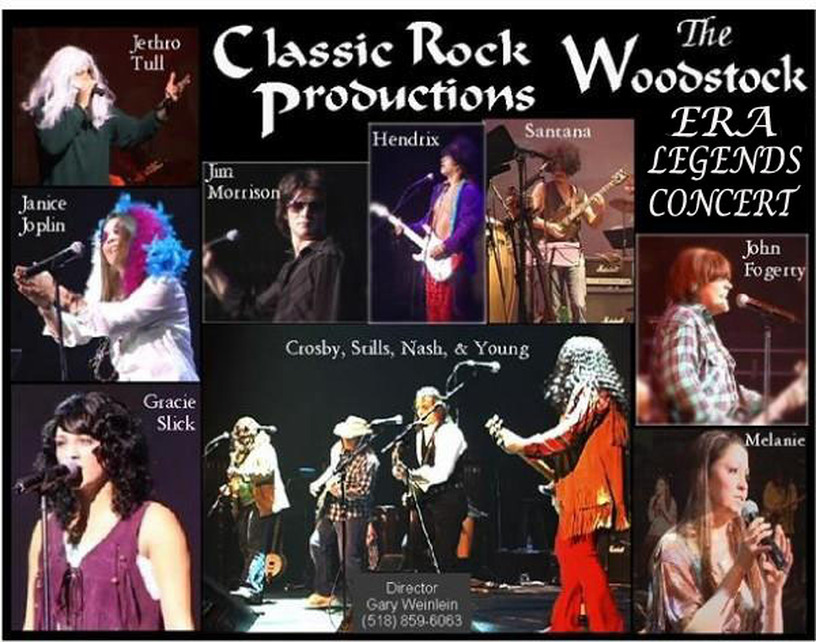 CLASSIC ROCK PRODUCTIONS present "THE WOODSTOCK ERA EXPERIENCE" (IN CONCERT) (the most believable musical production you will ever see). The show features a cast of professional musicians and singers who are dedicated to recreating the sounds and visuals of some of the most famous rock legends of the Woodstock Festival and the Summer of Love. The Woodstock Era Legends recaptures the live performances by superstars from the sixties classic rock music scene. Audiences leave the concerts feeling like they have just attended one of the history making festivals of this period Classic Rock. Return to a time when the music and lyrics mattered, to an era where the artists and their songs shaped our society more than any other period of rock and roll history. Feel the excitement as the show brings back to stage some of the greatest biggest names of the late sixties. Legends such as; Janis Joplin, Jimi Hendrix, Santana, Grace Slick of Jefferson Airplane, Crosby/Stills/Nash & Young, The Who, Melanie, John Foggerty of Credence Clearwater Revival, Joe Cocker, and even Jim Morrison of the Door's and Jethro Tull often show up for the fun. The most popular music from one of the most influential periods in the history of rock and roll is brought to you in one show like you've never heard or seen before. This explosive concert guarantees to bring you back to that, far-out, awesome man, hip and groovy feeling of the Summer of Love and into a night you will always remember. "C'mon along for the ride, we're gonna have a real good time".


CLASSIC ROCK PRODUCTIONS WEBSITE
FACEBOOK
"THIS SHOW IS AMAZINGLY INCREDIBLY AWESOME and MEMORABLE!
BELIEVE ME PEOPLE, THIS SHOW WILL BLOW YOU AWAY!"  -JULIO RAY

For the LAUGHNGSTOCK™ Musical Version of the show
with The BROADS of BROADWAY™ Comediennes and/or The COMEDY PIE™ Comics
Contact me and let's craft a memorable event you'll never forget!
Julio Ray #718-815-6233
E-mail: comedypie@gmail.com 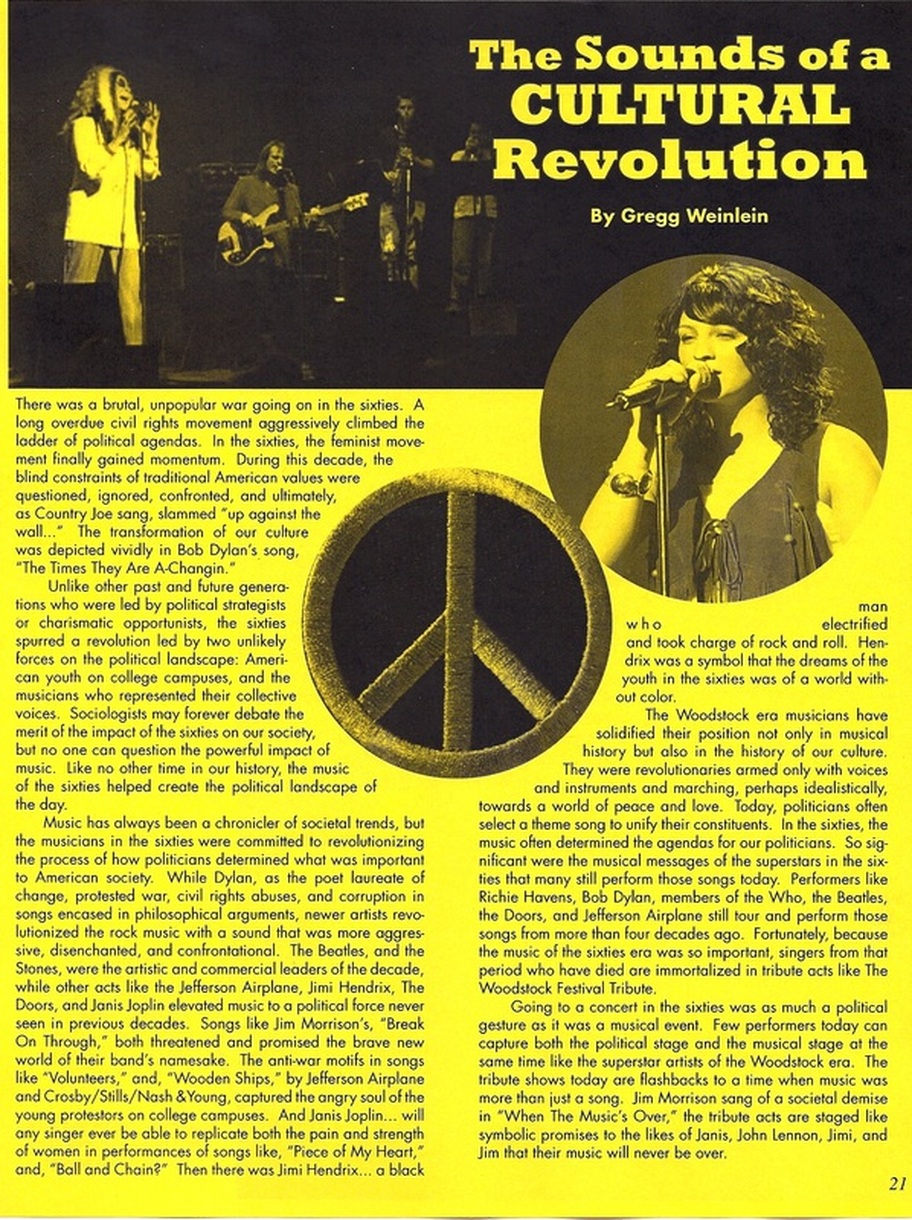 "YOU GOT MUSIC IN MY COMEDY!" -JULIO RAY, COMEDY PIE™ PRODUCTIONS

"YOU GOT COMEDY IN MY MUSIC!" -GARY WEINLEIN, PRODUCER, CLASSIC ROCK PRODUCTIONS" 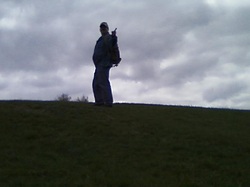 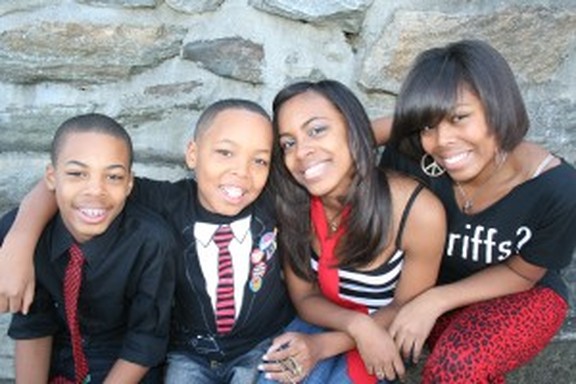 "ROCK MUSIC FINALLY EVOLVES! ...EXPERIENCE GRAVESHIFT!"  -JULIO RAY
We are The Graveshift. A family of 6 but a band of 4. If you ask who's the "leader of the band", trust me you'll get more than one leader. Jonah aka Sugar Man (13) is our vocalist. With his new and undiscovered voice he thinks he runs everything. He loves to be the center of attention. But we put him in his place from time to time. He has a personality like an old man at times. But most of the time he's outgoing, in your face and when he wants to be...charming. Don't let his cute lil looks fool you..he's really evil. So ladies BE CAREFUL!!.

BUT moving on..Joshua (14) keeps the beat going. He's kinda weird if you ask me, but thats from a sister's point of view. WE still love him though. I'll tell you this, he can fit into any groove you throw at him. He's a quick thinker and an artist. This dude has the whole package ladies n gentlemen. He's more on the shy side, but once he warms up to you he's loud and goofy.

Next is the PRIMA DONNA, Alexis who is 17. She thinks she's 21 and knows everything. But who doesn't think so at that age? Anyways she's a kick butt guitarist whether its acoustic or electric and a great songwriter. She writes everything from hard core rock songs to soft mellow acoustics. She tries to master everything...the bass, drums yes and even singing. But don't worry we told her to back off. She could be a solo act one day but it doesn't get better than this. She's nothing without us. lol At least thats what we tell her.

Lastly is me the bassist. I'm Erica (21) Yes I'm the oldest and yes I RUN EVERYTHING!!!. But free expression is welcomed. I'm real easy going and a total people person and I don't mind the lime light every once in awhile. I'm a artist at heart from painting to photography. But nothing beats a bass line that keeps the body swaying and the head rocking. But anyways keep checkin our page for any upcoming gigs!!! 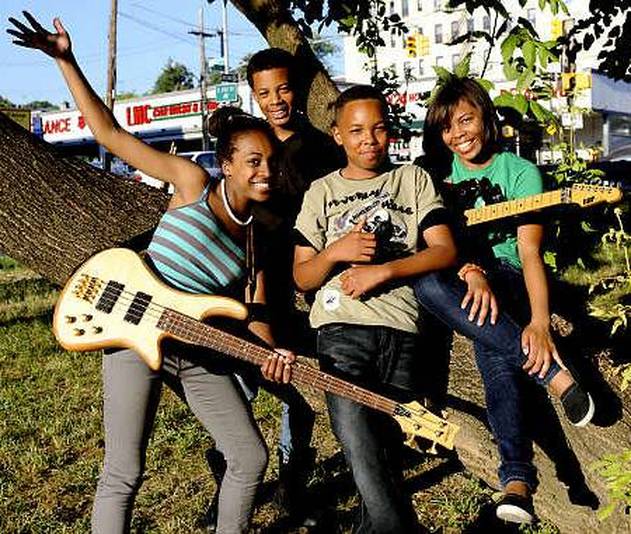 ... the girl groups of the 50's and 60's who sang their way into our hearts? Names like The Angels, The Crystals, The Ronnettes, The Shirelles, The Chiffons and The Supremes come to mind. These female groups dominated the music scene for more than a decade, and left behind a legacy of songs, which have endured the test of time.

As New York's premier girl group, The Chiclettes have many facets. Performing their classic girls group tribute, they take their audience on a musical journey through the history of female rock & roll that is unparalleled in the entertainment industry today. With faithful recreations of the harmonies and choreography of the girl group era, The Chiclettes have a remarkable show, which is truly unforgettable.

The Chiclettes also demonstrate their diversity with a wide array of dance music, performing favorites from the 70's, 80's, 90's, and today that are sure to get people out of their seats. Their appeal is universal; young and the young-at-heart appreciate them alike.

Over the years, various incarnations of The Chiclettes have shared the stage with such performers as The Drifters, Johnny Maestro & the Brooklyn Bridge,  The Coasters, Lou Christie, Southside Johnny, Little Anthony and the Imperials, The Cadillacs, The Del Vikings, and the list goes on. They have also appeared on NBC TV, CBS FM's Doo Wop Shop with Don K. Reed, and can be seen on the "Doo Wop 52" special produced by WQED TV and aired nationwide. Their harmony talents have been used to back up other artists such as Lou Christie and Mel Carter, and they've performed at theaters, concert halls and arenas everywhere in the tri-state area and beyond.

In 2010 The Chiclettes and their band, The Coda Band, appeared all over the tri-state area including Atlantic City, NJ, Wildwood, NJ, Yonkers, NY, and towns on Long Island, NY, upstate, NY and Connecticut. They continue the tradition of being an exciting, unique addition to any performing arts calendar. Whether the event is a show, concert, supper club, nightclub, fundraiser, dance, holiday party, reunion or wedding, the performance is tailored to suit any occasion. Wherever they perform, the combination of talent, memories, and a great time had by all always leaves a lasting impression!

For the LAUGHNGSTOCK™ Musical Version of the show
With The BROADS of BROADWAY™ Comediennes
Contact me and let's craft a memorable event you'll never forget!
Julio Ray #718-815-6233
E-mail: comedypie@gmail.com