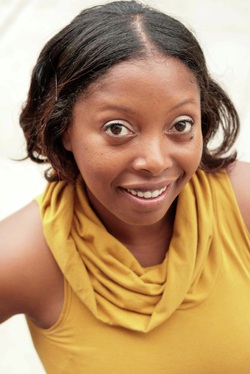 Quick-witted, funny and a very pleasant surprise on stage are just the beginning description of the one and only, DEL.  Make room—literally—whenever you're fortunate enough to see this zany young lady in action.  She's intelligent and brings material about her life to the stage that will leave your guts busted.  In 2005, DEL HARRISON was named one of the Best of New Faces at Jamie Foxx's Laffapalooza Comedy Festival and from that made her television debut on Robert Townsend’s Partners In Crime: The Next Generation Standup Comedy TV Show (Fall 2006) on the Black Family Channel. Since then, DEL has been on BETJ’s My Two Cents repeatedly, The Lisa Durden Show, WEtv's Cinematherapy, The Mike & Juliet Show on FOX, Dr. Oz, ComedyCentral.com’s Open Mic Fight Teaser, XM Radio's Spitkicker Radio with Courtney Brown, and 98.7 Kiss FM's Crank Squad with Jeff Foxx and The Wake-up Club.  In addition to standup and television, DEL also had a key role in an award-winning independent film titled, What A Difference (Dir. Nikki Bates). DEL is an excellent host and feature act and has hosted her own show at the famous Carolines on Broadway called First Sundays along with hosting the New York Underground Comedy Festival’s Funniest Feds Comedy Show, the National Association of Black Bikers Ski Weekend every year since 2006 and hosted and featured at the National Association of Black Female Executives in Music and Entertainment’s Women Who Jam Showcase in Harlem, NY .  "I love people and I love making them laugh," says DEL who has opened for big names such as Sheryl Underwood, Michael Colyar, Tommy Davidson and Dane Cook.  A hit with the college kids too, DEL has performed at colleges across the East Coast.  When you see her performance, you'll see why DEL has been nicknamed "the life of the party”.  She’s downright exciting to watch!

Be on the lookout for this powerhouse performer and check out her online sketch comedy TV show at youtube.com/delchong. Find her performance dates at www.delharrison.com.
DEL HARRISON

The Next Level TV Show (On Camera Host)

Faces Of Our Children’s Bowling for Sickle cell Program, Host and Organizer for fundraiser and show

What A Difference (Independent)